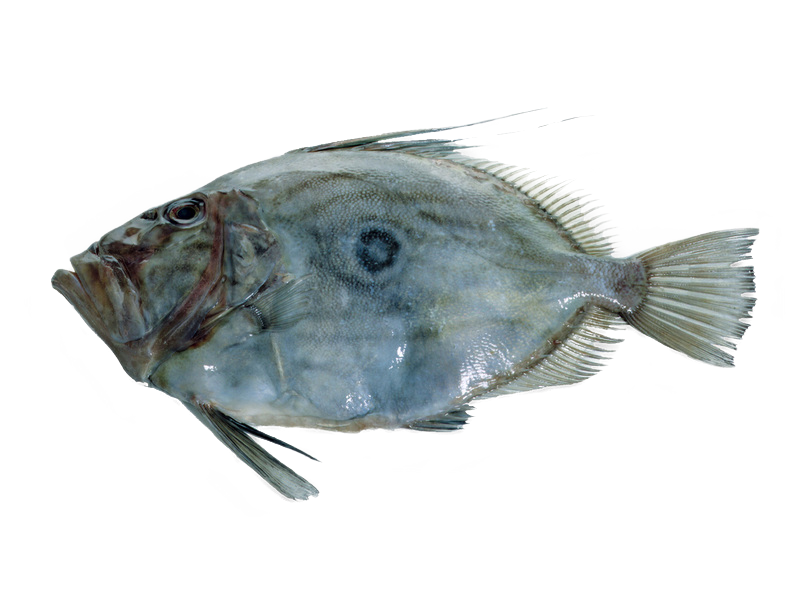 With over ten dorsal fins, the monstrous appearance of John Dory can be quite overwhelming to say the least. But despite their appearance, this solitary fish is a deep sea delicacy that has won the heart of top chefs all over the globe because of its distinct meat and authentic flavour. Also known as St. Pierre or St. Peter’s fish, John Dory is one fish that has a lot of stories to tell. Up until now, the real source of its unique name hasn’t been traced. Many people say that its name was actually derived from a French word which originally means ‘gilded’. While others tell of legends that say that the black spot located at the middle of its flat and oval-shaped body was the actual thumb mark by St. Peter that was left there after he took a coin from within the body of the fish.

John Dory is a native fish of the European coasts. Those that are commonly found in this area have a unique olive-yellow colour. However, its American counterpart has a silver colour with the same body structures. Nonetheless, a big percentage of John Dory supply in America is imported from the European coastal waters. In addition to these countries, it is also to find a rich source of John Dory from other countries like New Zealand, Australia and Japan. The peak season of John Dory is usually between July and October. Normally, a John Dory can reach a maximum size of 3 ft. and 8 lbs., though there are those who have grown considerably larger than the ordinary ones. John Dory are related to the Mirror Dory, which is another fish commonly found in certain parts of North America. They have an average lifespan of 12 years and can survive in the sea bed as deep as 1,300 ft.

In terms of feeding behaviour, they usually use the eye spots located at both sides of their body to confuse their prey. Afterwards, they will use a tube-like structure in their mouths to capture sea creatures like squids and small group of fish. They also have an edge as predators because they have two bulging eyes that are perfectly placed at the top of their heads for a clearer vision of what’s ahead and behind them.

Choosing the Best John Dory
Just like with any other sea food available, you also have to be particular in choosing what type of John Dory to buy in the market. There are several characteristics unique of a fresh John Dory that you should remember all the time to ensure that you choose the best among the rest. Here are some of the qualities you have to look in choosing the best John Dory out there:

1. Bulging eyes – a typical live John Dory has big eyes that are bulging out. If the eyes are positioned otherwise, you have to suspect that it might be not as fresh as you want it to be.

2. Red gills – nothing beats red gills that are a strong proof that a John Dory has been exposed to an adequate supply of oxygen.

3. Bright and shiny skin – what’s unique about a John Dory is the microscopic scales that are covering its whole body. You have to take note if its skin is shiny or dull because this will determine if a John Dory has been excessively exposed to the air or not.

4. Sweet smell – John Dory is a fish so you would normally expect it to have a fishy smell. However, a John Dory that is freshly harvested from the sea water has a sweet smell resembling its former habitat and not the foul and fishy odour that you normally smell from a fish that is not fresh.

Nutritional Properties
John Dory fish have a unique flavour which deserves a place in every five star hotel and restaurant around the world. But aside from its world-class taste, it can also bring nutritional benefits. It is low in saturated fats and a rich source of protein and other energy-releasing vitamins.

Storage and Preparation
John Dory is available both as whole fish and as fillets. Once purchased, you can keep it for two to three days if refrigerated. It is also possible to freeze the fish for up to a month if you need to purchase the fish well in advance of using it.

With its sweet and firm meat, John Dory fish can be served best with its skin still on. To get the best out of your John Dory, you can experiment with adding some spices and other flavourings. Although there are standard ways to prepare John Dory, you can also try to experiment with it by learning tips from sea food experts. The staff at Claringbold’s are always happy to share their knowledge on how best to prepare the fish you’ve chosen.

Here are some of the ways by which you can prepare a delectable John Dory dish:

Steaming – This is one of the healthiest ways and is best done with John Dory if you have vegetables to complement its taste and flavourful aroma.

Frying – This is the simplest way to prepare John Dory. You can just pan-fry it by coating it with a little bit of flour, salt and pepper. After a few minutes on each side, you will be able to enjoy the firm and succulent meat.

Baking – By coating it with a little bit of egg and flour, you can bake some John Dory by wrapping it in aluminium foil.